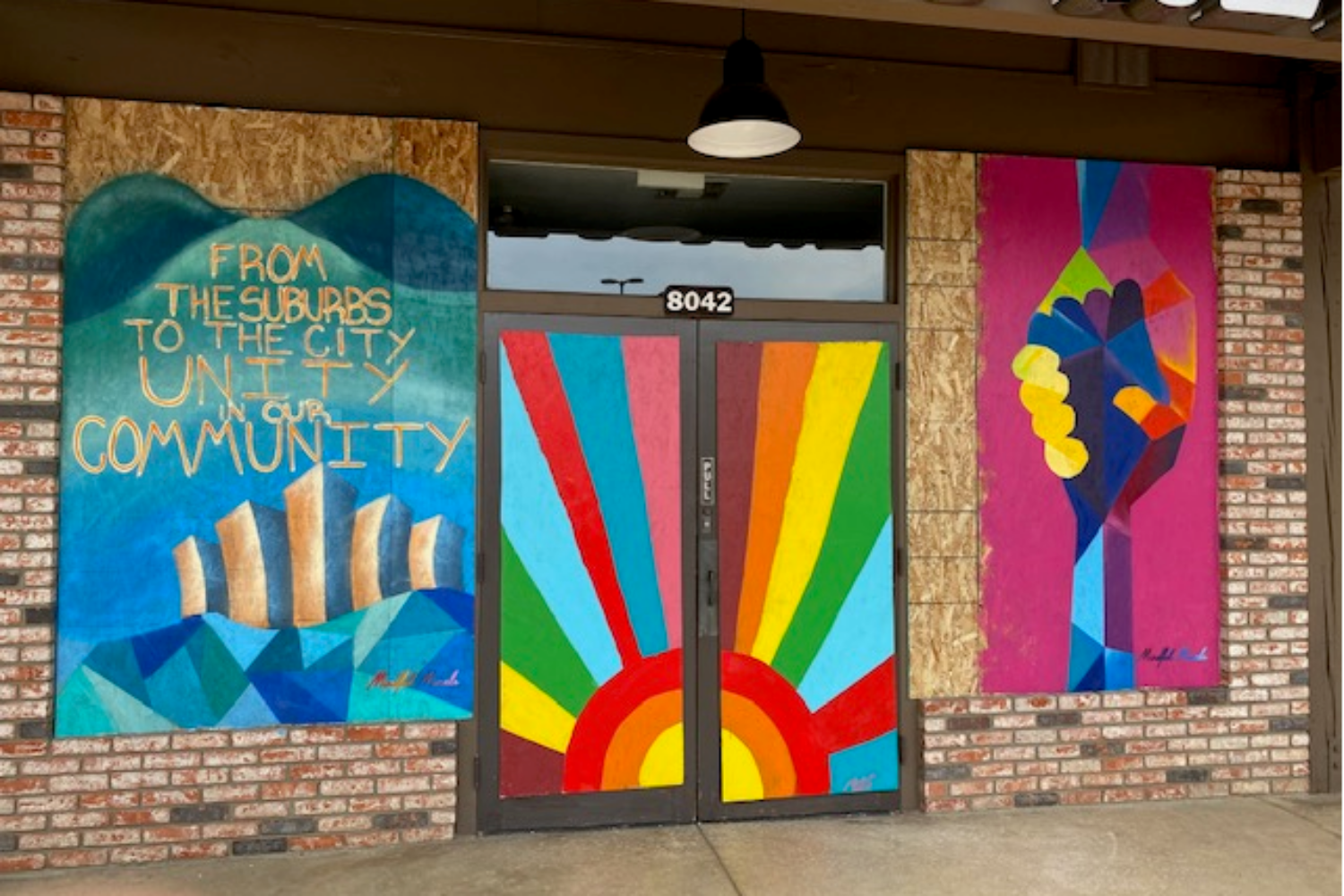 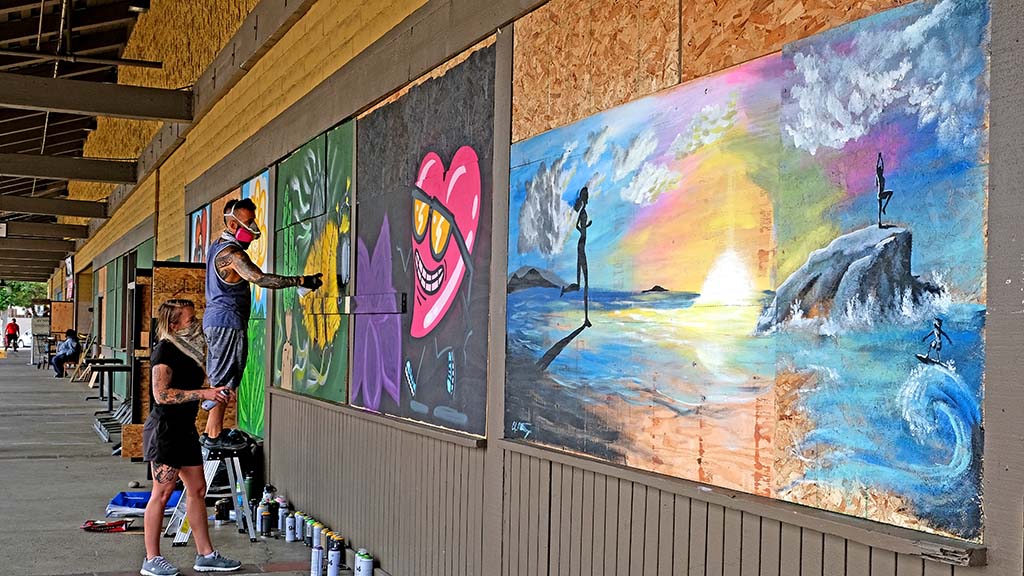 On the afternoon of May 30, Cheri Eckis, a Senior Portfolio Manager with Meissner Jacquet Commercial Real Estate Services discovered something alarming.   She was on Mt. Helix and could see the traffic stopped on the 8 freeway because of a protest.  A friend told her there were posts on social media indicating that protestors were moving towards the La Mesa Police Department. La Mesa Springs Shopping Center, a neighborhood center that Eckis has managed for ten years, is directly across the street from the Police Department.  She immediately contacted the property’s security guard and they continued to communicate via text the entire night.  Her team reached out to the property’s insurance agent to advise that there may be damage and to determine the next steps.

At some point after dark, the peaceful protest gave way to looters and rioters, and chaos ensued. Through the course of the night, rioters set two Vons delivery trucks in the parking lot on fire, bashed in windows and doors, looted the stores, sprayed profanity-laced graffiti around the property, and set a fire inside Vons and Play it Again Sports.  Eckis’ heart broke as she watched the violence unfold via social media.  “All I could think was, it’s a 40+-year-old structure, it’s going to burn down, but fortunately, the fire sprinkler systems kicked in and put the fires out quickly.”

Fred Hochrein of San Diego Building Services Security, the security company for La Mesa Springs, started calling 911 when the violence erupted; it took him 45 minutes to get through.  He and a fellow guard began to circulate the parking lot from a safe distance in his vehicle and they watched as the crowd grew.

Hochrein described the scene: “I called the police again for the second or third time and requested assistance.  It was at that moment the large crowds began to overcome and enter the Vons storefront.  [I heard] breaking glass, people screaming and [watched] a frenzy of people running along the plaza front destroying property, entering businesses, and leaving with merchandise.  A group of people running from Play it Again Sports wielding bats, approach[ed] my car.  My guard and I exited the parking lot and stayed above the perimeter to observe. Again, I reached out to police only to be told by dispatch that they were aware of what was happening and doing the best they could.”

Meanwhile, the looting and rioting continued.  After seeing a few people with handguns, and realizing he and the merchants were seriously outnumbered, Hochrein advised Eckis that he was going to “bow out.” However, he stayed on the scene but made himself invisible to avoid being a target. “There was nothing he could do to stop it,” Eckis advised. “The police weren’t even there.”  Finally, after 11:30 p.m., she was notified that the riot police were on the scene, but the damage was done.

Eckis knew the “place was going to be a mess,” and she needed to contact vendors to help clean, board up the windows, and cover the graffiti. “We couldn’t do anything until the situation was stable and we had our services lined up and ready to go.  We turned the irrigation off due to some broken lines and brought in cleaning crews.”  She arrived on the scene early the next morning, having already called in several vendors (Lot Management, San Diego Building Services, and Faro Lafata Enterprises) for help with the cleaning up and boarding up windows and doors.

When she got there, “the center was already packed with members of the La Mesa community. They brought their own brooms, trash bags, paint, and gloves to help clean up.”  She asked someone in the parking lot of California Coast Credit Union if they were with the bank and the person replied, “No, we live up the street.”  Hundreds of volunteers worked together to clean up the broken glass and debris and to paint over the profanity from the night before. Members of the community brought bottles of water to hand out to volunteers and Round Table Pizza, a longtime tenant in the center, handed out free pizza and soda to the volunteers. Starbucks, another shopping center tenant, brought coffee to the crowd.  “To me, it was like the community was saying, ‘Last night was not La Mesa; you’re not going to do this in our community,’ and it was personal to them,” Eckis said. Most of the tenants are long term, and as this shopping center is within walking distance of many homes, it is part of the fabric of this family-oriented community.

General Contractor Faro Lafata of Faro Lafata Enterprises brought in plywood on behalf of the property owner and, working in conjunction with construction workers from the apartment construction site across the street, proceeded to board up all broken windows and doors.  Ownership paid for the plywood, but the labor was all donated by these contractors. Eckis helped sweep up glass in several suites.

Eckis met with each of the tenants, advising them to contact their insurance company immediately and to assess the damage to each of their suites.  As for the exterior of the property, she says, “The common area didn’t get hit as hard as the individual tenants.” Most of the common area damage, aside from two electric vehicle charging stations being vandalized and the landscaping being trampled, was graffiti.  “The community brought paint – all different colors – and painted over the hate. They covered everything up that day, they just brought what they had in the garage. It was awesome.  The community came together that day – churches came together in the parking lot and prayed over the community.”

By the following Monday, local artists came to paint murals at La Mesa Springs. La Mesa Glass donated all of the replacement glass for the broken windows and doors.  As of today, much of the glass has been replaced but the plywood is back over it due to two additional notifications of protests in the area.  Many of the tenants were open for business the following day. Vons was reopened within a week, despite the fire inside.  A local radio station is holding a drive for Play it Again Sports – to drop off used sporting equipment to help the business.

Eckis says La Mesa Springs is “really a special property to me. When we took over management, there was a pigeon problem, a homeless problem, and some deferred maintenance.  We have taken care of the deferred maintenance, installed new LED lighting, renovated the landscaping, added electric charging stations and increased the level of service to the property, all without increasing the CAM more than ten cents in the past ten years.”

Though most of the tenants are considered essential services and were able to stay open despite the state’s stay-at-home order, a few tenants – Sport Clips, Diamond Nails, Wang Ho Tae Kwon Do, Crazy Fred’s, and Play it Again Sports have been closed and are planning to reopen shortly. The community has started several GoFundMe accounts to help these tenants reopen and the La Mesa Chamber of Commerce has set up an account for the more than $200,000 in donations received outside of the GoFundMe accounts.  The Chamber is ready to help the tenants rebuild using funds from this account.  “Mary England, the President and CEO of the La Mesa Chamber of Commerce, has been awesome.”

San Diego Building Services Security typically has one standing guard in the morning and one in the evening for a total of 16 hours per day; however, Eckis advised that she increased their service to 24 hours per day for a couple of weeks after the incident.  They also provided additional guards the next day to maintain the peace and make sure people did not try to go inside the tenant spaces.

“Overall, there’s really nothing you can do as a manager in a situation like this where the police couldn’t go in. You certainly do not want to send your own security company in where the crowds just want to burn down buildings.  Just let police gain control, which they did.”

When asked if she had any closing thoughts, Eckis replied, “I can’t look back and say, ‘What would I do differently?’ In this situation, the only thing we could do is react. As a manager, making sure all the tenant’s certificates of insurance were up to date is key. Kudos to my Administrative Assistant Lisa Johnsen for consistently making sure they are. Also, having good service providers we can rely on to be there first thing to help us. Communication is very important – we are staying in communication with our tenants, letting them know what we are doing and that we’re here to help.”  Eckis added, “It was a really emotional time for all of us. I shed a few tears with the tenants that day.”