Based on the Vacancy Rate and Rental Rate Summary table below (which includes market data from CoStar Group compiled by IRR San Diego), the San Diego retail vacancy rate from the last full quarter was approximately 4.3%, which is generally similar to two quarters ago and to one year ago. Over the last three years, the retail vacancy rate has decreased by about 1.7%. The average asking rental rate (on triple net basis) is $22.29 per square foot per year, a 2.34% increase from the previous quarter, and a 4.65% increase from one year ago. 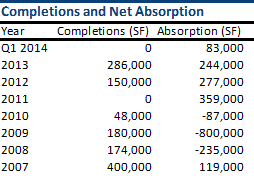 As with completions, absorption was affected by the latest economic recession with negative absorption numbers from 2008 to 2010. However, San Diego has experienced steady positive absorption for the last three full years and is currently positive in 2014.

Based on the market indicators above, the overall San Diego retail market has experienced positive conditions over the past three years. Based on the data presented, demand for retail space continues to increase, which will have a positive effect on property values in the near future.